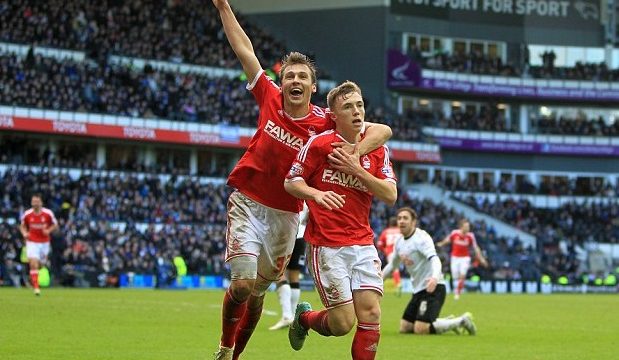 When I see Ben Osborn, I just think maggots!

To a psychoneurotic boffin of football fandom, this was the sort of moment I had fantasised about for years. I had envisaged, and re-envisaged it, over and over again in my mind. I would keep re-imagining it, and then subtly changing the iconography of it. And even then, I would analyse its kinetics…

Would it be better if it went in via a deflection, or was bundled in at the back post? If I fell onto-the row in front, or into the abyss of the stairwell?

Unbelievably, these were the sort of thoughts that meandered through my teenage mind regularly, and then attached themselves to a cerebral enigma that really did, just seem too good to ever become true.

Understandably I guess, to a Forest fan born in the new millenium, the thought of a last minute winner at Derby seemed as feasible as the thought of the same club winning the European Cup (Twice). It was a dream.

Which meant that when Robert Tesche’s sliced volley from the edge of box looped gracefully into the hands of Lee Grant in the 91st minute, I introspectively querried myself again…

The thought this time was inconceivable and yet rather ironically, I had just spent the last eight years of my life quite literally rationalising every possible way in which it could have. I guess the concept amidst the potency at Pride Park, where the memories of a 5-0 thrashing were still grating the back of my brain was too ridiculous to fathom. And so on that premise, I learnt never to beg for a Forest goal again, since it just so happens to be the case that when you want one the most, you never bloody get one.

With that in mind, and the thought that Forest’s last possible chance to snatch a winner had been and gone, when the ball broke to Osborn as though Tesche had slotted the final coupon to complete connect four, I pensively told myself ‘to keep calm’ since I couldn’t for one minute believe what was coming next.

As Ben Osborn cantered onto the loose ball, his first touch inspired a cacophonous roar from the away end. A moment I won’t ever forget because it was so raucous its reverberations flung me into the ethereal utopia that had transfixed my imagination for years. The cynical side of me still expected to see him Cruyff turn on the edge of the box and destroy the hopes and prayers of all those around me. But after Osborn’s second and third touch it was like the away end was collapsing on itself, magnetized to the weight on Ben’s shoulders as he dribbled us all through a telekinetic portal and into the celestial world where men rein-act myths.

All of a sudden there was no doubt. Twenty-five yards from goal with the keeper to beat and it felt like the world was beginning to reverse its orbit while turning upside down. He can’t miss!

The ball bulged the back of the net and just like flicking the clutch to dispense a seven-column, six-row vertically suspended grid loaded with plastic discs waiting to scatter out the bottom, an almighty mess ensued.

With no where near enough brain capacity left to comprehend the enormity of what had just happened, I had become lost in all of its perfection. It was an indescribable feeling, where the next minute just seemed to amalgamate platonically into a scene of sheer pandemonium. Everybody, and I mean everybody, even in the wheelchair enclosure, had lost their heads.

There were grown men bounding off each other in pure ecstasy, while groups of bodies entangled themseleves into human cyclones that cascaded down the stairwell in the form of a stampede. If you watch it back on YouTube, you can see the remnants of it when the players are pulling themselves away from the relentless surge in the corner.

In the words of a mate who spent all that night watching it back, “the celebration was like an animal. Just think maggots and then view it again!”

To be in it, was incredible. It was an absolute frenzy and with fans deliriously throwing themselves into each other without a care in the world for each others well-being, I can understand why it seemed animalistic to those watching on the tele.  There was no time to process it and I suppose that is why it was so unbelievably special at the time.

But my fondest memory of it all, was the aftermath. I loved how while Forest were holding on in the dying moments just seconds after the winner flew in, fans were frantically galavanting around the away end and cajoling random people they had probably recognised from last year’s drubbing. It was like a scene on Christmas Day when the extended family skip through the door and start dishing out hugs and kisses like they know who you are.

The whole thing was perfect, and miles better than anything I had ever pre-envisaged.