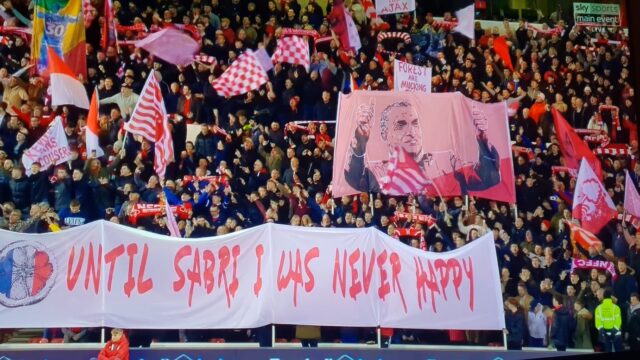 A Little Bit Of Sunshine

‘’I don’t think the (lack of) ability of whoever manages Nottingham Forest is the fundamental cornerstone that we think it is. Not at the moment anyway.’’

The feeling is new but then again it’s so familiar. It’s more hollow than usual but isn’t everything about football hollow at the moment? Under Warburton, Karanka and O’Neill the circumstances and the emotions differed but the same path was trodden. And here we stand again, staring once again down the same dusty road. Another variation on a theme.

The reasons behind Sabri Lamouchi’s dismissal are hard to argue against – the loss of form was agonising but showed no real sign of ending. Many of us crave stability but we also acknowledge that we simply can’t keep losing games. I do however question the wider picture around events since July – the decision to try and give Sabri time and resource was refreshing but the total annihilation of a team / squad that, despite its failings at the end, achieved our best placed finish for a decade was as absurd as it was unsustainable.

Lamouchi inevitably will always have felt the heat for losing games but it’s becoming increasingly apparent that it shouldn’t just be the one man we keep in our sniper scope. Recent games have led to in depth online assassinations of Lamouchi while we point blank refuse to consider wider circumstances. Everything we know tells us that the manager’s position cannot be the single factor. Yet we keep banking on the current one being our downfall and the next one being the answer. It’s mental. The latest tweets from Daniel Taylor demonstrate this way better than I can.

Could anyone succeed in an environment where our transfer strategy, largely outside of the manager’s remit, is to collect players like a kid in the nineties collected Merlin football stickers?

Could anyone progress a team where 7th place is deemed reason enough to dismantle a squad and start again, leading to instances like the Huddersfield game where we start an entirely new back four?

Could anyone prosper in a situation where the owner gets everyone on a Zoom call and starts belittling the manager and certain players in front of the entire squad? (WTF?!)

Could anyone thrive at a club where players are discarded in the latest huff like old tupperware tossed to the back of the clutter cupboard? We keep blaming our managers for these decisions but is it really that straightforward? The latest Athletic piece certainly breathes new life into this debate.

And these questions could go on and on.

We get failure because we deserve failure. Certain fans will tell me I can’t possibly understand any of this because I’m not involved in the inner workings of a football club. Rubbish! We can see enough. It’s not hard to look at this and realise why we are destined to not succeed as things stand.

Each time, each new era with every new man in the dugout, we think we are breaking free from our fate but it’s always there lurking close behind. Perhaps the issue is we simply try to outrun it rather than facing it head on. Promotion at all costs is our only real policy and it shows. Everything else we simply refuse to think about and it is classed as default failure. And we’re scared shitless of it; the confrontation and the very thought of it.

‘’My football club is weak. It has been for a long, long time. It is stained with a fear of failure even though it has been failing for so, so long. It panics, it reacts and when it really needs to be it has a woeful inability to be brave… It does not solve problems; it merely avoids them and starts again.’’

For a football club which gears itself up for success we aren’t half brilliant at failing. We almost revel in it. In these stone cold moments of reality when you can extract yourself from the boiling pot of football it seems absolutely ridiculous that we even let ourselves get drawn into any kind of hope. But we do, of course we do.

What I can tell you about Lamouchi is he offered me hope and also rejuvenation. Away games are almost always a pleasure but after two decades they’d become hard work at times. Under Sabri I was relishing a jaunt to Blackburn or Cardiff on a long midweek trip because, for the first time ever in my life, I felt like we’d win. It was thrilling. After the victory at Griffin Park I’ve possibly never been happier as a Forest supporter in recent years; I would have skipped home up the M1 quite happily.

For a long time I was sure Sabri had us reborn even though you could tell it was a tenuous existence; age old problems would occasionally resurface and then, come the summer, they were suffocating us again. Sabri couldn’t halt the slide but I’m really not sure anyone is a powerful enough wizard to transform us for good. Not as things are. I’m just grateful to Lamouchi that he could, for a while, overcome it and give us all a little bit of sunshine. So thank you Sabri, for everything.

‘Until Sabri I Was Never Happy’ read his banner. While it was never supposed to be taking literally it was closer to the mark then we realised.

As Forest fans when we find hope it’s important we grasp it. What’s the alternative? To admit that our beloved club is an absolute farce? Because sadly it is. And we can still love it in spite of everything; we don’t have to deal in absolutes. Forest getting battered at home to Millwall doesn’t really bother me all that much. It stings for a bit sure enough but I can get over it. Even if Twitter becomes a no-go zone for 24 hours while the #NFFC timeline burn their virtual homes to the ground.

My main issue lies with a football club that I struggle to be proud of at times. Occasionally I have been dismayed by its actions and such instances have increased in frequency of late. We can easily point to improvements since the Crown C**t of Kuwait but that’s far from a level with which we should measure ourselves. Nor is the rather lame argument that success at Olympiakos is relevant to getting a middling football club out of the Championship after two decades. Sometimes we seem almost reluctant to acknowledge problems as fans.

We mustn’t get worked up on every last thing but lately there has, in my opinion, been times when the club has failed to live up to its own standards. Communication has suffered badly – even simple things like recognising Ben Watson’s departure or wishing Sabri well have not happened. The furloughing of staff news snuck out the back door via journalists, the confusion over supporters’ flags being removed from the ground and a season card offer that wasn’t just poor, it appeared dismissive and arrogant. Forest didn’t properly address any of these items as they should and that has inevitably heightened the worry.

A major and ongoing issue is that there is a total aversion within the club to any form of criticism from supporters. There has been numerous instances that demonstrate this and we at Forza Garibaldi have experienced this ourselves. This also seems totally at odds to early correspondence from this regime in 2017 which stated: ‘’…we are committed to giving supporters and the community a say at the highest levels of the Club. We believe you are entitled to this as a right and this should not depend on you owning shares in the Club.’’

Such words in 2017 were most welcome and not altogether untrue. Fans have been welcomed in to share views but anyone deemed to be not towing the line has often felt the wrath or faced consequences – myself included. I don’t expect to agree or understand every last decision, of course not, just like the club shouldn’t have to address fans with everything. But they are, I hope, at least questioning why a growing number of fans are beginning to express concern. This is an ideal time to open up and welcome queries and not to shirk challenges laid down by worried supporters.

Despite the assurances, fans views are not represented at Forest currently. Fans Advisory Boards, supporter elections and other initiatives that were revealed with great fanfare have come to nothing – groups like Forza Garibaldi exist in a state of limbo where we appear to be utilised only when it suits and we have always said that we are not representative of the wider fanbase. There is therefore a place now to look again at how supporters (any supporter) can become part of helping feedback, advise and, yes, challenge the club. Where necessary that must happen and the club needs challenging right now on certain things.

My football club needs to do better. That’s my opinion. And victories won’t change that. Forest must do more to live up to their promises, embrace their fans and also protect us. Football supporters across the entire spectrum have never been more disillusioned and we remain sat out in the cold for a fair while yet. It’s hugely important that our football clubs recognise this and none more so than Forest. They know we will always have their back; it would be nice to know that they have ours.

A warm welcome to Chris Hughton. I’m going to try my best to not get attached. But I know I probably will. You Reds.