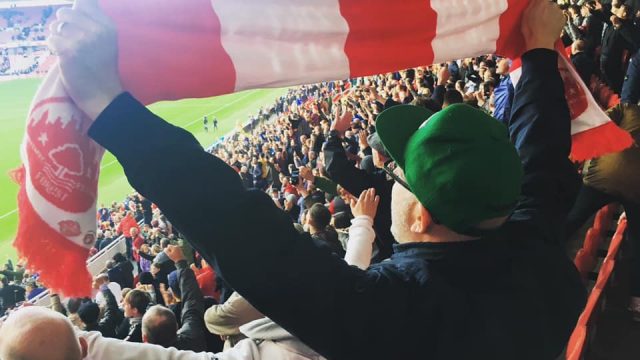 On 18th September we wrote to the Chairman expressing concerns with the recently announced away ticketing policy*. This correspondence summarised three primary points:

1. The online-only policy for away ticket sales in the first 7 days of sale combined with away members only being provided with a 4 day priority period

2. The booking fee applied to each order which is on top of the away membership fee of £30

3. The Friends & Family system which forms part of the online booking process

As a general issue we also contested the ‘loyalty tax’ away membership scheme and questioned whether this was a fair method of regular away fans securing tickets.

The letter we put together was done so after a message on our social media channels requesting the thoughts of supporters on 17th September. We also spoke to various people in person, lots of you at away games. It should be said that not everybody found fault with the system, some were clearly already using the online tool often and nothing had really changed for them. Yet a significant proportion of supporters found issues, largely based around the above three items.

Firstly we are keen not to chastise the club for this. It’s a system which we and many others feel is flawed and not user-friendly for supporters of all types and ages but it is perhaps a relatively small matter. We would however balance this by saying travelling away is a very important part of following Forest for many and obtaining tickets is a regular task which should be made as simple as possible.

We have always stressed that we do not represent the fanbase but we did feel that this was a subject that we could try and help on, especially as it is one that has affected us directly. We were also appointed part of the Fans Advisory Board last season and felt it was about time we advised on something!

On Tuesday 9th October we attended a meeting with Head of Marketing Simon Bristow and newly appointed Supporter Services Manager Scott Paul at the ground to discuss these issues. We will breakdown some of the key points below:

A. Scott Paul introduced himself and advised he has been with the club for 4 weeks. This is a new position which will involve interacting with and assisting supporters in addition to overseeing the ticketing at NFFC. He has held similar positions at Villa, Leicester and Wasps Rugby.

In his opening weeks he has reviewed the current procedures and admits that lots of improvements can be made. In particular the away ticketing system is not as it should be. One of Scott’s first acts was to remove the booking fee for away membership holders and revise the £1 charge to a ‘per transaction’ rather than a ‘per ticket’ basis. Many of you will be aware of this by now. Point 2 above is therefore resolved.

B. Further to Item A Scott admitted that the Friends & Family system is not fit for purpose and that it will be overhauled in the near future. There has clearly been a particular issue related to large groups who travel together not being able to get on the same list and therefore having to sit apart. Some patience is required here but a new system will replace it which allows supporters to be able to identify whose list they are on and subsequently be able to add themselves to other lists as they choose.

For us and many others this has been a big issue but we are assured that this will be put right as soon as possible.

C. The online-only policy for 7 days is to be looked at. While there was no specific guarantee, the club are aware that this is not an ideal situation for supporters due to a number of reasons. Scott pointed to a relaxing of the rules for Burton tickets as a step in the right direction (away members have the ability to buy in person after 48 hours of their priority window – usually away members have no such chance to do this).

The phone system is not currently up to scratch and is one reason why they have been keen to move away from that as a point of sale. We were informed that every time an away game goes on sale the entire club’s phone network is jammed, including non-ticket office lines. A solution to this is also being examined.

D. It would seem the away membership scheme will not be scrapped. It is a revenue stream for the club and they feel it represents good value. The relatively low cost of a home season ticket was pointed out as part of a bigger picture plus the removal of the booking fee for away members which balances out the cost a little.

The issue around low allocation games was discussed (Burton, QPR specifically referenced) and the club acknowledge that ideally a ‘loyalty system’ will be in place. There is approaching 2,000 away members and this could cause a problem with demand exceeding supply. While it wasn’t in place for Burton they will be looking to implement a tiered structure as done previously where those who have attended the most games will get priority.

We made the suggestion that loyalty points should roll over from the previous season for a period of time rather than each season being re-set. An opening away fixture with a low allocation could otherwise be problematic.

E. In addition to the subject of away membership, the club realise that some supporters are enticed to purchase an away membership solely in order to jump the queue for a Derby ticket. As of yesterday there are still several hundred people who have yet to attend an away game but hold an away membership.

The ticket office is considering implementing something which prevents this happening albeit they don’t know how they will do this as yet. Their view is that paying £30 should not be sufficient to enable them to go to Derby ahead of non-away members who have attended away games previously in the season.

F. The club have received some feedback from fans regarding perceived unfairness in the priority of tickets for the upcoming Burton cup game. Those who attended all three home cup games felt that this should have been recognised when selling tickets for Burton. The club agree and want to reward those who have turned out in the League Cup but this presents a dilemma for them.

It was discussed whether attending three cup games at home was more worthy of priority over someone who had travelled to, say, Swansea, Blackburn and Middlesbrough. Perhaps 5,000 will have attended all three cup games so this would have presented another issue in itself considering the allocation of 1,600. We pointed out that the majority of those who travelled to those away games probably would have also attended the cup games.

This issue is under scrutiny from the club.

G. One new initiative that we feel is a very good addition to away ticketing is the fans now being able to state a preference for where they sit when buying tickets. We had this explained as follows:

> Anyone who purchases a ticket within the first few days of them going on sale will be able to request where they sit i.e front, back etc.

> Another request the ticket office will meet is to help sit people who purchased at different times together. So, for example, if you buy your ticket on the second day of sale but your friends have purchased on the first day of sale you can request to be allocated tickets with them.

> Forest will allocate / distribute tickets at the start of the second week of sales so any requests must be with them by then – either in person or via a phone call. All requests made will then be actioned as far as is possible.

H. Further to Item G we raised the point about fans sometimes being stuck with seats they don’t want. The best examples of this are fans who want to sit being at the back and those who want to stand being at the front. The matter of atmosphere also comes into this – those who want to sing throughout the game will often wish to be standing towards the back. This new system of being able to request seats should help a great deal with this.

In conclusion, the major gripes that some fans have with the new away ticket policy are being dealt with by the club which is good to hear. The ability to buy in person has already been relaxed and will hopefully be re-installed in full soon. Booking fees had already been removed for away members before our meeting while the Friends & Family system will, we are assured, be put right as soon as possible.

We do believe the current away membership should be reviewed. We are told a review will happen to an extent but that there are no plans to remove the £30 cost for it. 2,000 members at £30 each will equate to £60,000 revenue for NFFC. While we appreciate this is a sizeable sum is it actually a big amount of money for a football club? Is £30 a fair price or is there a fairer way to do it without charging supporters?

Of course we must point out how the club have engaged us (and other supporters) on this. As mentioned at the top this matter could perhaps be deemed fairly trivial by them but they invited us in to discuss concerns. For that they deserve much credit. We are a world away from where we were – we have qualified and, above all, decent people running the club. Thanks to Simon and to Scott for their time.

We hope those of you who travel away found this helpful in some regard. If you have any queries or need any more information please let us know although we are certain that the club will have no issues with you contacting them directly.

*If you wish to read our original correspondence to the club please message us with your e-mail address and we will be happy to forward on. Our e-mail was responded to by the Chairman, Nicholas Randall QC, within two hours and he assured us this would be looked at.