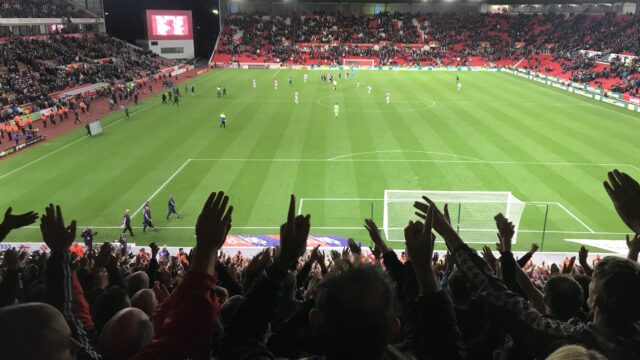 I spent the weeks leading up to the return of lockdown football telling anyone that would listen that a finale without supporters was only ever going to be a few notches above meaningless. If you are expecting the next line to about how I was wrong then you are mistaken.

As we await the ninth and final game of the regular campaign I can’t say I’ve changed my mind too much I’m sorry to say.

The last month has been a sickly collection of football to gorge on. I suppose it’s been nice for some normality to creep back in as I casually check the score between West Ham and Norwich like I give a shit. And it has provided opportunities to meet up and watch games in small bubbles of long forgotten football pals.

That latter point has been somewhat of a saving grace on the odd occasion when we’ve been able to stand awkwardly around in someone’s back garden to try and make the most of following our team. They’ve been pleasant and enjoyable but dancing around in the back of my mind is that we should have been there – while I hold just about enough intelligence to fully understand why we aren’t I can’t help but feel some resentment, even if it’s not really aimed at anyone.

As much as Sky Sports would have us think otherwise the finale of a long football season is in no way a TV product. The drama and the hysteria is predominantly created by the crowd, not some genius with a ball at his feet.

As stupid as it may be each game for me has been dominated by thoughts of what we would have been doing in the stands. Bellowing out useless instructions about ‘MAN ON!’ or ‘Come on, these are fucking shit’ which is a personal favourite futile shout of mine.

Nor could it escape my mind and I suspect some of yours too how we would have reacted to certain moments in games, primarily the Forest goals. When Lolley scored against Derby I clenched my fist and let out a gleeful ‘YES!’ while stood on my back garden. In another happier world I would have been gasping for breath under 25 bodies experiencing an occasion which right there at that point in time would have seemed as close to total euphoria as I’m ever likely to get.

Yet below my angst and obvious detachment from these final games of the 2019/20 season, deep down is the same old desire. To see my team succeed.

While that is clearly a natural aim, part of it stems from an affection I have formed for this side and Sabri Lamouchi. They have made this a refreshing season for me and, in many ways, re-energised my love for following Forest if such a thing was needed. Nowhere is this more apparent than away games which have transformed in 2019/20 to games that we actually win quite often. I believe it may be close to our best ever win record at this level for twenty years.

While our home form has let us down at times our away support has had some long overdue rewards for the time, effort and cash many plough into the black hole of Forest away games. On the pitch and in the stands it’s been a bloody joy following NFFC all over the country this season. And that’s not a coincidence.

While there have been pot holes aplenty, prior to the suspension of football I had looked forward to every game, I had felt confident before each game and I had not felt such a strong connection between supporters and players for almost two decades.

I’ve witnessed a team blossom so quickly under the stewardship of Lamouchi, thrive on big game atmospheres where they would previously wilt and take us to a finish which is very possibly going to be our best for a decade. Even if we fail tonight amongst the inevitable nuclear fall-out, our league placing will be higher this season for the third consecutive season following years of dropping further and further down the table under the foolish Kuwaiti regime. The Greeks may have hoped for much quicker progress but the ‘Rise of the Garibaldi’ still continues.

At times in the last year we have played ludicrously poorly, never worse than our last game against Barnsley, but focussing on isolated games and mistakes by Lamouchi or his players threatens to neglect various ways in which we have progressed.

Primarily, and in spite of a number of shaky defeats, we aren’t a pushover anymore. And it’s extremely uncommon to see a team want the game more than we do. You could often sense previously that we would be a good team to play for a side in need of a result – this is why Barnsley was so disappointing because we rolled over for them in their hour of need. But such instances have been rare and I live in hope that Lamouchi earning himself the holy grail of a second season (he better!) will see further improvements.

This will ring true too for the style of play you would expect. A famous manager of ours once deemed that a strong side was built from the back – that was the priority. I have a theory that Lamouchi has decided it necessary that the art of defending was where this side needed to begin. Not only our set up in games but little alterations like changing the dug out to be closer to the traditional Bridgford End goal we are defending in the second half.

If you believe this theory, and I admit I could be talking nonsense, then Lamouchi has excelled in picking up our main weakness early on and zooming in on it. Maybe attacking flair had to be sacrificed in his mind. That aside let’s not kid ourselves that we haven’t shown attacking intent at times. And I do not see us going away and taking a point before kick-off like we have tried to do so often before. When we have been able to I’ve seen us really open up teams and I don’t deny  I want to see more of that. But not at the expense of us exposing our behind for a regular spanking.

‘But what about the late goals we concede?’ I hear you screaming at the screen. Calm down. If it helps go and do another seventeen tweets in one day about it and all will surely be well.

Frankly, our record of shipping late goals is absurd. It’s daft to offer a defence for it but it’s hopefully a final piece of the defensive puzzle that we can put right soon. It should have been resolved by now I know. To try and valiantly put a positive spin on it, when the time comes and these late goals can be eradicated our points tally would suddenly lift us into automatic reckoning.

If only it were that simple, eh?

Nobody is going to argue that we don’t have our flaws, the old adage about how hard it is to build a promotion side in a single season still applies. But despite that, Lamouchi has us in with a shot. And we are only one game away from another tilt at those godforsaken play-offs.

It hurts that we can’t be there this evening for a critical game. And we won’t be able to do our bit, however small, to secure a top six finish. But I have faith that these players will get it done.

I’ll be willing you on tonight from afar, lads. And in the future. Come what may.