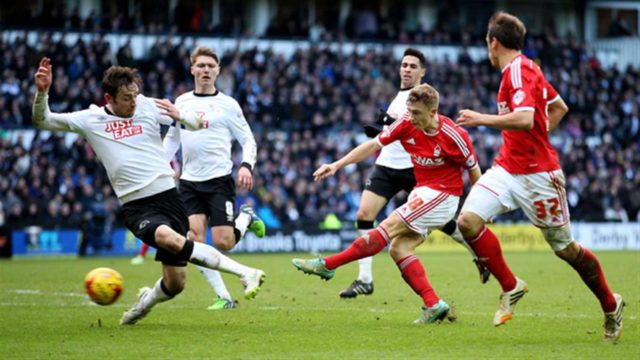 It’s what should have been match day, the biggest match day of the season. We would be putting our well versed pre match plans into place. Meeting for breakfast and a pint at some ungodly hour, sorting some train cans for the short journey, and quadruple checking you have got the match tickets, don’t forget the tickets!! Nothing will make up for missing this one, it hurts. But, there are things more important than this game. Here is the final instalment of our Derby Day Tales, we hope you enjoy.

Oh what a night. That goal from Ben Osborn is definitely up there as one of my best memories following Forest, unfortunately, I was in the wrong end…

I must admit, I was never fully comfortable, and still to this day I am not, with the idea of sitting in the home end for our biggest fixture of the year – but when we missed out on the away end and were offered free tickets in ‘their’ end, we had to be there.

Having ‘home’ tickets, we thought we might as well head into the centre of town and grab an early beer, before heading into one of those god awful away pubs. We could only stomach the one, hearing their voices slagging us off wasn’t ideal, or much fun for that matter. Once we had joined fellow reds’ in the pub, the anticipation began to build and the beers were flowing – I might add that we were still franticly searching for any spare tickets. The more beer that was supped and the louder the pub was getting, I was growing increasingly more nervous about what we were about to do and how the whole day might play out. Anyway, onto the ground.

As we walked through the turnstiles the nerves went through the roof and naturally, started to question what on earth we were doing – what happens if we score? What if we win? What if this is our best ever result away at Derby? The game started and we took our seats, the away end was in fine form, out singing the sheep like normal, and all we could do was sit there and admire from afar. Lansbury’s own goal sent the sheep into some awful limbs, we remained seated, refusing to join in the ‘celebrations’. The game continued and all I can liken it to is a nightmare, we were losing 1-0 to ‘them’ and we were having to sit amidst them all celebrating and talking us down, little did they, and I, know what was about to happen. Assombalonga turned and finished after the ball bounced around the box and the away end went mental (in a strange way, it was interesting to see from an alternative angle). We couldn’t contain ourselves either, letting out a ‘GET IN’ and half jumping up off our seats. It was loud enough to get the attention of those around us, but somehow it didn’t cause a stir, all they did was stare at us for a while and then moved on. As the game carried on, all you could hear was the away end, the jealousy of not being in there was really hitting home. It wasn’t a nice feeling.

Then ‘Benny scored a goal in injury time’, wow! We completely forgot where we were for that moment, celebrating as if we were in that away end when obviously we weren’t. Strangely, there was lots of money thrown our way, along with quite a few threats, some of which even involved asking us to meet in the toilets – very odd. For a second I really didn’t care, we had just scored what would prove to be an injury time winner in the biggest game of the season. Then it hit home, we were the odd ones out. As the home fans began to stream out the ground, a few decided to take pictures of us, I presume to post on some Derby forums or fan pages. At that point, we wanted to get out of there and head to be with our fellow reds’. Leaving the ground unscathed, despite those offers to meet in the toilets, we headed round to where the Forest fans were to try and head back to town with them. Forgetting that we were coming from the home end, we unsurprisingly didn’t manage to get round to the Forest fans and had to venture back to town alone. 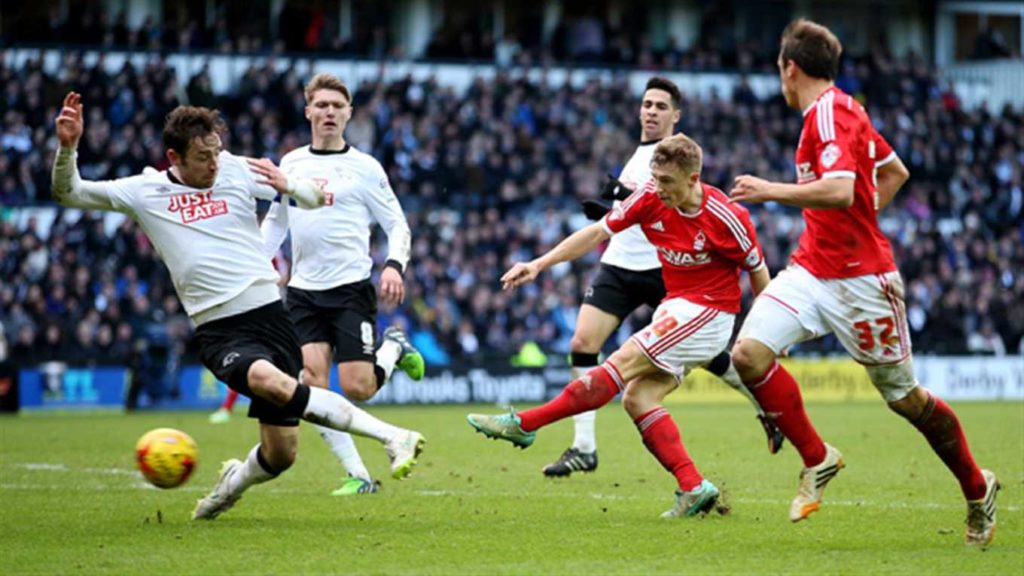 Even though we were in the wrong end and missed out on those celebrations, it still felt brilliant, I didn’t really care because we had beaten ‘them’. Nonetheless, I wouldn’t recommend the experience to anyone, I can’t imagine how bad it would’ve been had we lost. Oh what a night…

We know nothing can quite fill the void for a fixture like this, but we hope these Derby Day Tales have helped a little. It remains to be seen whether we will get our trip to the flat pack stadium, or what will happen with the remaining fixtures for that matter. These are interesting times, times none of us have ever been through before, and hopefully never will again. Football, rightly is taking a back seat. That doesn’t mean we can’t miss it, reminisce of times gone by or look forward to the time it returns. How bloody good will it be when it returns? Having something to look forwards to, to plan for and for everything to go back to ‘normal’. It’ll be one hell of a pre-match when we’re back and I cannot wait.

Thank you to everyone who submitted a story to us. Hopefully these Derby Day Tales have passed some time for you all.