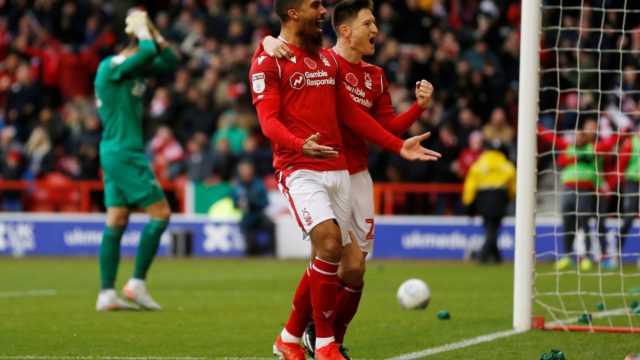 Welcome to the latest in our series of Derby Day Tales. This is the second part of our short stories submitted by our fellow Reds. Take a moment and enjoy…

Aged 15 and I was a season ticket holder in the old Trent end and had mentioned to my Mum that I fancied going to the away game at Derby, I got a resounding , “no way” from my Mum.

I’d already been to Villa away a few weeks before and didn’t  tell her (Son of the year material right here), so I figured I’d just say I was going into town and then head to the game.

The day of the game arrives and I get on the train from Nottingham station straight to the brand new Rams Line Halt, a platform right outside the away end of the Baseball Ground. Being young and showing off I stuck my head out the door window as the train was slowing down, others had scarves out, singing songs etc and the atmosphere from what I remember was all good.

Anyway, into the ground, stood on the terrace directly behind the goal and we win 2-0. Hodge and Jemson with the goals if memory serves me right.

I head home, and although my mum gave me a suspicions look of …’you’ve been in town alot longer than usual’  I figured I’d gotten away with it.

Monday comes. Off to school. Usual day and head back home and all is well until…

Sitting watching the local TV news there’s a news feature about the new platform being opened for the game and to my slowly dawning horror the clip is showing a train pulling into the platform with a pale ginger kid with his head stuck out the door window my mum just turns to me:

“That kid looks just like you, but it can’t be, because you were in Nottingham”

I’m sat there totally busted. Grounded for 2 weeks (including no football playing or watching) and feeling like the world’s worst son.

My Mum passed away about six years after this but before that time we’d already joked about the whole event as one of those funny growing up stories we all have. So the story now is a nice memory really and makes me smile .

Trains also proved a problem for another Forest fan ahead of the game at The City Ground earlier this season:

Picture the scene. It was a pretty standard Thursday evening, I’d booked onto the 7pm train to get me back to Nottingham from Uni. I just thought it would make more sense to not risk my luck travelling down on the Friday and there was no chance I was wasting valuable drinking time on match day.

The train rolls off from Liverpool Lime Street and I sit down to finish an essay off. But I’ve got no laptop charger. Off to a flyer.

The train eventually gets to Manchester Oxford Road. And never leaves.

Half an hour passes before we’re told anything. No trains are running south of Manchester; this is a nightmare of Kenco coffee cup proportions. Back to Liverpool it is.

I didn’t use the opportunity to just get back to mine and sleep, in order to catch the first train in the morning though. No, of course not. I was straight out into town and straight up in the morning on four hours sleep.

The Friday was far smoother than I could have wished for, and the torture of sitting on trains for hours on end was wiped away as Lewis Grabban capitalised on Jayden Bogle’s errand back pass.

I had my mates by my side and The Reds were doing the job on the pitch. It was what football is meant to be all about.

Inevitably there was a certain game from 2015 that was a popular choice when it came to fans choosing their favourite memory from the East Midlands Derby. For a generation of us it’s probably the moment we all fall back on. But even for those who have seen it all it’s still right up there.

I’ve been following Forest since I was eight years old in 1969.  We’d just moved to Farnsfield from Mansfield Woodhouse.  I thought it was about time I followed a team.  I turned to the lad sitting next to me in Mrs Kettleborough’s class at Walter D’Ayncourt school – Mark McCue.  “Who do you support Mark?”,  “Nottingham Forest, why?”  “That’s who I support” – I sneakily admitted.  I got away with it.

That night over dinner I told my Dad.  “Hey Dad, I support Nottingham Forest”.  “That’s good son, they’re playing Wolves on Saturday, let’s go!”.  My mum protested….. “Your grandad’s been a Derby County fan for 60 years, he won’t be happy”.

Over the next few years we saw Direby on the telly more than Forest.  But me and my sisters loyally took the bus to Huntingdon St station, every other Saturday, queued up for the Trent End from 12:30, read every word of the programme and took our punishment – and glory.  So, what about Derby matches?  Too many to mention, so here’s my favourite…

Wind forward 44 years to 17 Jan 2015.  Months before we had arranged a surprise party for my great nephew Harry’s 18th,  at the Premier Inn Preston – he was at college in Preston – on Sat 16 Jan. When the fixtures came out I was going to miss the match.  Thanks to Sky for moving it to the Sunday….. It was a massive night.  So I was feeling a bit weary the next morning.

My mum and sisters were heading back to Notts.  My nephew and his family to Hull for a ferry en-route back to Germany where he was posted in the Army.  My wife was dropped off at Preston station for a train back to our house near Milton Keynes.  I heading south on the M6 & A50, past Alton Towers, head throbbing, tired and taking in plenty of coffee.  Traffic was not so good.

Closer to the ground traffic as ridiculous.  I doubled-back and parked in a multi-story off the High St.  A 30-min walk to ground past the Derby pubs.  “Will the car be OK?” – I’m thinking.  It’s only an Astra Coupe, but it’s covered in Forest gear.  “Follow Me to The City Ground, NG1!” it says….  More things to worry about – “Get to the ground!”

Well, inside the atmosphere was magic.  I’d been there the previous season when we’d lost 0-5 and never stopped singing  – “…Everywhere we go…..”    Lansbury scored the opening own goal.  Psycho needed some inspiration.  Britt scored a typical Britt goal – “just hit the target!” – and well, when Ben Osborn nailed the winner at the near post, wow!  Just Wow!

For some reason I’d got my ticket late that year and was at the back row, on the right, alongside the stewards and the silent sheep.  It was just mental.  I’ve still got the Sky recording on my hard drive and play it back regularly.  You can see me if you look hard enough.

I left the ground with the Forest fans heading back to the station, with Richard Lewis waving his Mutley Flag.  I got mine shortly afterwards….  As I cut out of that crowd to head for the High St it got a bit dodgy amongst the crying sheep, but nothing too serious.  “Psycho is back” – we sung for a while, but then it stagnated again.  Shame.

Never mind, bring on the next one.  Having seen a lot (everything except an FA Cup Win!!?) since 1969, now is just as much fun!  It gets better every time.  COME ON YOU REDS!

Of course not every memory is conjured exclusively by those at the game. Markan, part of the London Trickies network, witnessed Ben Osborn’s late winner at Pride Park from the capital:

5 of us found a pub in Kensington and proceeded to get very, very drunk. Not entirely sure what the locals made of our celebration when Osborn smashed it in.. and I don’t really care!

One of the lads who will remain unnamed got a bit carried away, ended up going through a fire door and celebrating with the traffic on the High St. An unforgettable day and night!

Another stand-out game in recent history was in 2010. Due to family circumstances, Jonathan never made the it at all:

It was my first daughters first xmas and I had decided not to get a season ticket for the season due to my wife having epilepsy and not knowing how her body would handle having a baby.

Xmas morning I woke up and she had got me a ticket for the derby game coming up in a few days. I was buzzing and couldn’t wait to go. During the day my newborn’s temperature went sky high and Xmas day night we were in a&e which in turn ended up on a ward in qmc.

She had a bad virus and needed to stay in hospital for a little time.

We were due to play derby on the 29th but that was the last thing on my mind. The 29th came and the three of us were still in QMC.

My Mrs was telling me to go and to have a break, but how could I?

I ended up giving my ticket away and I sat in my car in the car park facing the window where my daughter was, Radio Nottingham on, singing MOK in my own, tears in my eyes.

It was then I heard the roar of the crowd, so I spent the following 90+mins with my windows down, radio up, freezing but feeling apart of it.

When I walked back to my Mrs and daughter and got asked who won, I broke down in tears saying ‘we did em 5-2’.

I know I wasn’t there and even though I’ve been to so many victories this is the one that stands out.

Perhaps the finest victory over Derby since we left the Premier League came in 2003 – Paul Hart’s young side overcoming Derby on another barmy game under the lights.

This was the first Derby match on Nottingham soil for coming round to five years. The anticipation was incredible.

It was a splendid March day and the Waterfront bars were packed all afternoon. The songs spilled out across the canal as kick-off approached. The drinking was, in some cases, done way too excessively. A friend of friend missed most if not all of the game after passing out in the Meadows due to alcohol consumption.

My dad would later remark that almost everyone in the ground was pissed. He wasn’t far wrong. The tannoy blasted out ‘We Will Rock You’ right before kick-off and the stadium did the clap like we were all avid Queen fanatics. It would be called ‘tinpot’ now but that night it was like a war cry.

That night Forest decimated Derby. If it wasn’t so fun it would be gruesome. The attack of Johnson, Harewood and Huckerby were mesmeric.

John Gregory, taunted throughout with a song about a circus in the town and Robert Lee by the A Block, couldn’t possibly survive such a mauling and was gone by the morning.

About an hour after the game had finished the first bombs landed on Baghdad signalling the start of the Iraq War. It’s peculiar how these things stick in the memory together.