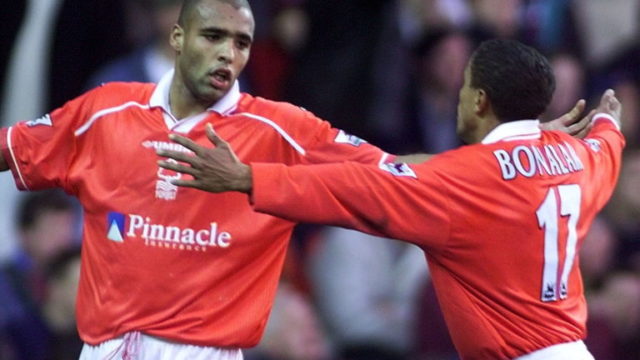 My first East Midlands derby took place in our last season in the top flight. If you need some context to make you shudder, Tony Dorigo scored against us for Derby. If you are unsure who Tony Dorigo is then it only reinforces the point that it was a long, long time ago.

I’d started to attend games regularly the season before and witnessed us get promoted six months prior but I’d yet to experience anything with intensity quite like this. Derby were in town.

It was a Monday evening kick-off live on TV in November. I insisted on wearing my Forest shirt over the top of my coat because things like that mattered to an excited 13 year old. It did then anyway. Thinking about it you don’t see much of this anymore.

Walking past Nottingham Station with my older brother and some of his pals I got my first glimpse of the enemy. A group of Derby fans had been rounded up off their train and were being marched down towards London Road via the back streets.

This small escort crossed our path and we somehow ended up inside it. I remember thinking this was quite amusing and felt no danger until a police office screamed to his colleague (and I do mean screamed): ‘GET THEM OUT OF HERE’.

The Trent End was humming along like I had never seen before. The entire ground was the same although it was far from a sell-out, even with 4,000 away fans. That seems disappointing looking back now but we hardly sold out any games that season – the 1-8 against United we definitely did, perhaps the 2-2 with the Scousers, but not many. Some context, however, is needed here. The club was crippled by the ownership of Nigel Wray and Irving Scholar and fans had revolted after a catastrophic summer which still haunts the club to this day in my opinion.

Forest were also anchored to the foot of the table although it didn’t appear to matter to anyone inside The City Ground that night.

As the game began I was absorbed into the atmosphere and the… desperation. I’d get used to the game-long ache of nerves in the years to come that accompany these fixtures but my youthful naivety and enthusiasm were more than enough to overcome any worries on this occasion.

I was particularly fond of the anti-Derby rhetoric that dominated much of the noise early on. I heard a new song which I instantly adored and would share the following day with my school mates:

By you Derby bastards,

I can recall hearing this at Hillsborough a few weeks later in what was my first ever away game. But this time ‘Derby’ was replaced by ‘Yorkshire’. Until then I had figured this was exclusively a Derby bashing song and was amazed by the genius of switching it each time to our opponents. The simple joy that can be found at that age!

The game was a pretty good one but it really sprang into life during the second half with all four goals coming in fifteen minutes. That man Dorigo opened the scoring from the penalty spot after Dean Strurridge was tripped by Thierry Bonalair. Cue despair and heartache which lasted all of one minute before Dougie Freedman pounced to level the score. Now the flip side as joy and wild celebration ripped through the ground.

Five minutes later and the place erupted when Pierre Van Hooijdonk nodded in from a corner.

Pierre had recently returned from his infamous strike and this was his first goal since he had ended his exile. He ran to celebrate in front of the Trent End but not one of his team mates joined him; they instead had their own celebration. Van Hooijdonk was belatedly greeted by Bonalair and Nigel Quashie but the point had been made.

Not that any of the supporters cared about this in the moment, you understand. We were all going bonkers. I had been lifted into the air by my brother and could witness from up high the scale of the delight across the upper Trent End. Over twenty years on and I can still recall someone from the rows behind violently patting my head in the midst of the celebration.

Just watching the footage back and I’m bemused to hear goal music played. It seems an odd decision, having just taken the lead against your closest rivals, to blast out bloody ‘Walking On Sunshine’!

Sadly Derby did find an equaliser ten minutes on from this and the game finished 2-2. It was crushing but the night remained a thrilling one for me all the same. While the memories of what unfolded on the pitch fade with time the moments in the build-up and in the stands still flicker vividly. For me, it is those moments that make these derby days so special.

While I wasn’t there at the away game later in the season when we fell to a 1-0 defeat I have been present at every single encounter since then. Many low points and some incredible games mixed with the most sacred of moments. Johnson, Earnshaw, Hobbs, Osborn, Oliveira, Benaloune. And the rest.

When football does return and if Saturday’s scheduled game does happen at some point, I do hope I and everybody else can be there to witness it. It is supporters that create these occasions and, while safety must absolutely remain paramount, this fixture in particular would be oh so hollow without us.

In the stupid words of Joe Kinnear I fear it would become ”just another game.”