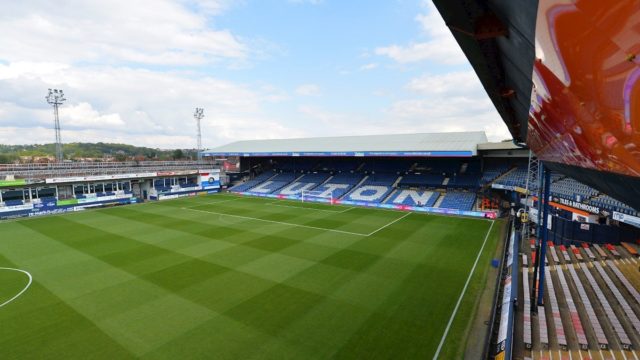 I wonder if there is any way left for this season to end in anything but extreme emotion; one or 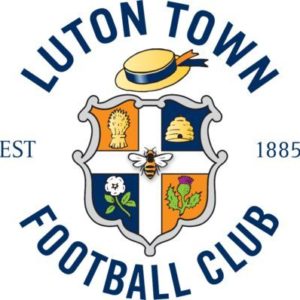 the other. Only a few weeks ago I’d have found 7th place a real disappointment but I would have found plenty of solace in our rise up the table and some most enjoyable moments.

Maybe that’s still possible, yet here I am starting to wonder if we’ve sailed past such a blissful, ‘haven’t we enjoyed this’ type of season. Things might be about to get tense. The sudden realisation that Bournemouth might be catchable while our top six spot is still a long, long way from being confirmed adds not just jeopardy but starts to make me feel a little woozy. It’s a bit like that moment on a night out when you know it’s time to commit to that next drink or get yourself in a taxi. I believe some refer to it as ‘Go big or go home.’

But the thing is, going big has become a calling card of this team.

You look down the bar and Joe Worrall and Ryan Yates are necking back another shot of something, Scott McKenna is leading a singalong in the corner to a tune by Depeche Mode, Samba is wearing shades even though it’s pitch black in here and Keinan Davis has just won the jackpot on the fruity.

They’re all here. Colback, Horvath and Lolley having a laugh in the corner, Steve Cook and Toby Figs are chatting with the doormen about keeping out troublemakers, Surridge, Spence and Johnson have a crowd around them on the dancefloor, the good-looking bastards. Max Lowe boogies over to join them. And there’s Grabban. And Zinck. The definition of cool. If it wasn’t for the fact that they’ve got Jimmy Garner on their shoulders trying to get the DJ to put Acquiesce on. And what the fuck is Cafu doing up there on the chandelier?!

There’s no signs of anyone even thinking about calling it a night. Forest having fun. And whatever happens, I love this lot. I love them dearly. They’ve made me proud, and they’ve made me happy. I’m desperate for them to succeed. For them, and for myself, and for everyone. But I suspect I will always treasure this season and this team. They made Forest come alive again.

The final notes of Acquiesce fade and the chimes of something instantly familiar fills the venue. Everyone knows it and the opening lines from the Swedish pop masters lifts the mood even higher.

A fair-haired Welshman, the leader of the Garibaldi, bolts for the door. ‘Not again’.

TRAINS: Services are pretty regular, generally a couple of train an hour, at around 12 mins past the hour and 50 mins past the hour, from Nottingham although a direct service to Luton seem to be a thing of the past. A change in Kettering is required. A standard day return is £55.70 but you can make a small saving by getting a couple of good value single tickets from Nottingham to Kettering (around £8 each way at the time of checking on EastMidlandsRailway.co.uk) and then get a return from there to Luton. It brings the cost down to around £45 but these singles do restrict you to get specific trains.

Luton station is around a 15-20 minute walk to Kenilworth Road. 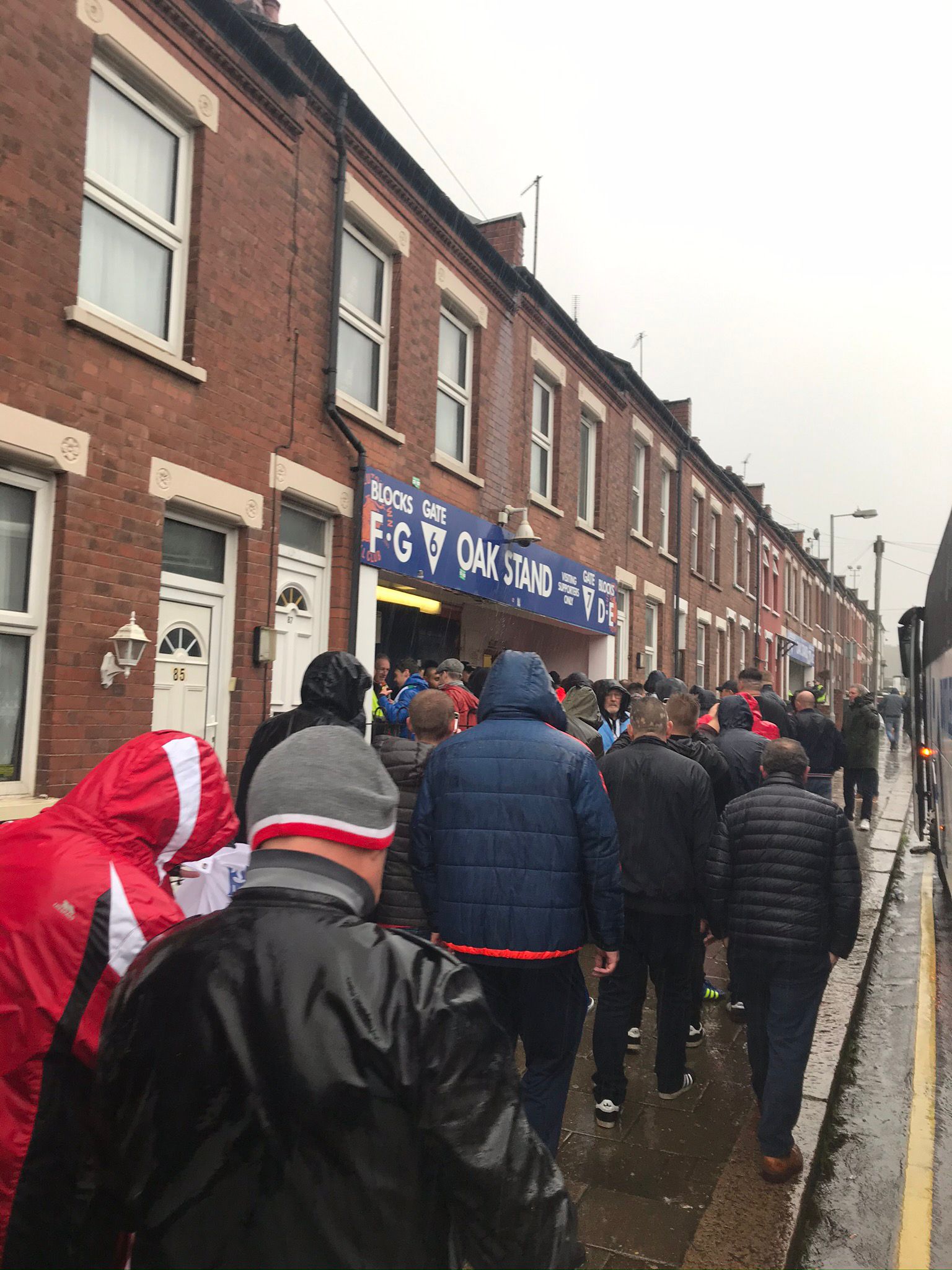 ROAD: Junction 11 off the M1 is the most direct route to the ground. The A505 virtually takes you past Kenilworth Road and on into the centre of Luton. There is famously streets around the ground, the away end turnstiles are sandwiched between terraced houses and the stairs up into the stand offer a bizarre sight into neighbouring gardens (see below pic).

Street parking may exist somewhere next to the ground but I can’t remember any and when we visited a couple of years back I can remember some having a long battle to get away afterwards. I can’t offer any concrete parking spots but coming off at the M1 junction before, 11a, may offer more parking options and a quicker get away north afterwards. Of course, it is a Bank Holiday so parking restriction on streets should be relaxed. Our Luton fan below has some more specifics.

We have a bus going down, leaving Nottingham at 8am. All spaces are sold but we intend to head directly to Luton and hope to be around by 10am. 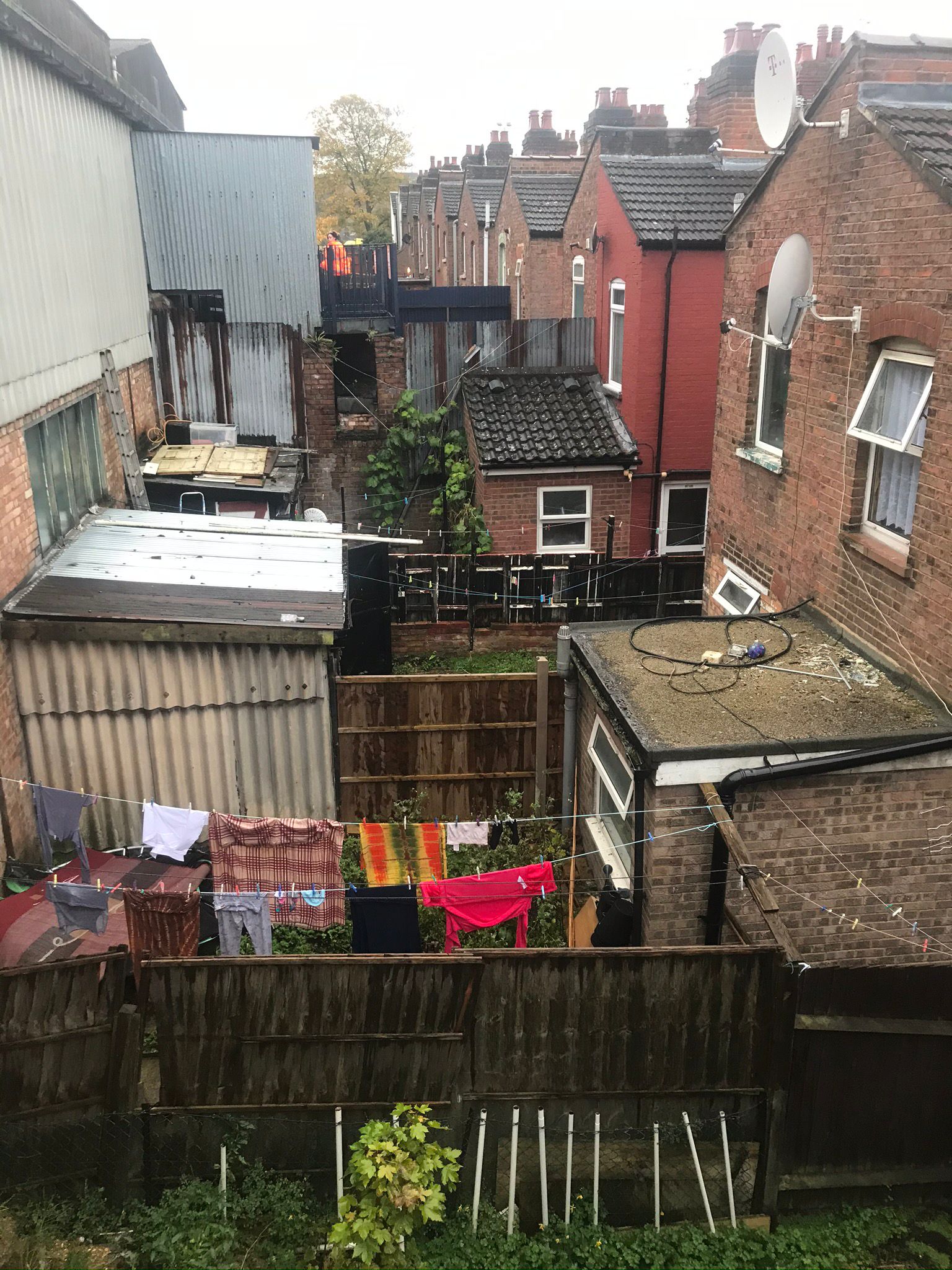 There will be a few places to choose from in the middle of Luton but the early kick-off may complicate it a little. The following are places that have been recommended:

The White House – a Wetherspoons that opens at 8am.

Off The Wall – we are informed that this will be welcoming Forest fans, opens at 9am. Around the back of the big shopping mall.

The Red Lion – close by to Off The Wall, another that will welcome away fans, opens at 10am. A bit more like a traditional pub this one.

The Wetherspoons will likely be a mix of Luton, a few Forest and general locals. The other two are likely to be better bets for those looking for lively Forest pubs although we aren’t entirely sure if these are solely away pubs or mixed. As it stands our plan will be to head to Off The Wall or the Red Lion, maybe even sample both if time allows.

1. The rise of Luton to the upper reaches of the Championship has taken many by surprise. It’s a wonderful season you are having, but is it one you saw coming?

Short answer is that we have been building towards a season like this since our return to the Football League.

After being cast out by the FA and EFL the club has been rebuilt on strong foundations on and off the pitch.  Every season we are improving and at the start of the season we said we were excited by our recruitment. We said top half finish and flirting with the possibility of the playoffs and that’s exactly where we are.

2. There was a line on a recent edition of the EFL highlights show about Luton possibly being the first club in the modern post-1992 era to make their way from the conference to the Premier League. Clearly you have a chance given where you are in the table but how do you rate your chances?

It’s fair to say that a lot of other teams’ supporters have underestimated our team all season (look at the hashtag TeamsLikeLuton) but Hatters fans know on our day we can compete with anyone. The playoffs are a tough ask but not beyond our reach and at the time of writing it’s still in our own hands.

What a story it would be if we could indeed make the premier league, but the statistic of being the first team to drop from the top league to non-league and then get back there will happen even if it doesn’t happen this season.

3. What’s the latest on your new ground plans?

The new stadium is definitely happening, and the final detailed plan was scheduled for the early part of this year. The site is being tidied up and buildings are being demolished. The sister development site was sold recently to help fund the building works so its all looking great. All Hatters fans know that we need to move to this unique stadium to ensure our future but all of us will be sad to leave Kenilworth Road.

4. We spoke some time back to a group called the Loyal Luton Supporters Club who were setting out trying to do some positive things among the Luton fanbase. How are they faring?

They are always active looking for fan interaction and have a strong membership base. They are always looking for ways to raise money for good causes and recently raised money for a Luton fan seriously injured at our away fixture at QPR. They also arrange fan events, such as Fulham away, where they have arranged for several party boats to cruise down the Thames to the game. 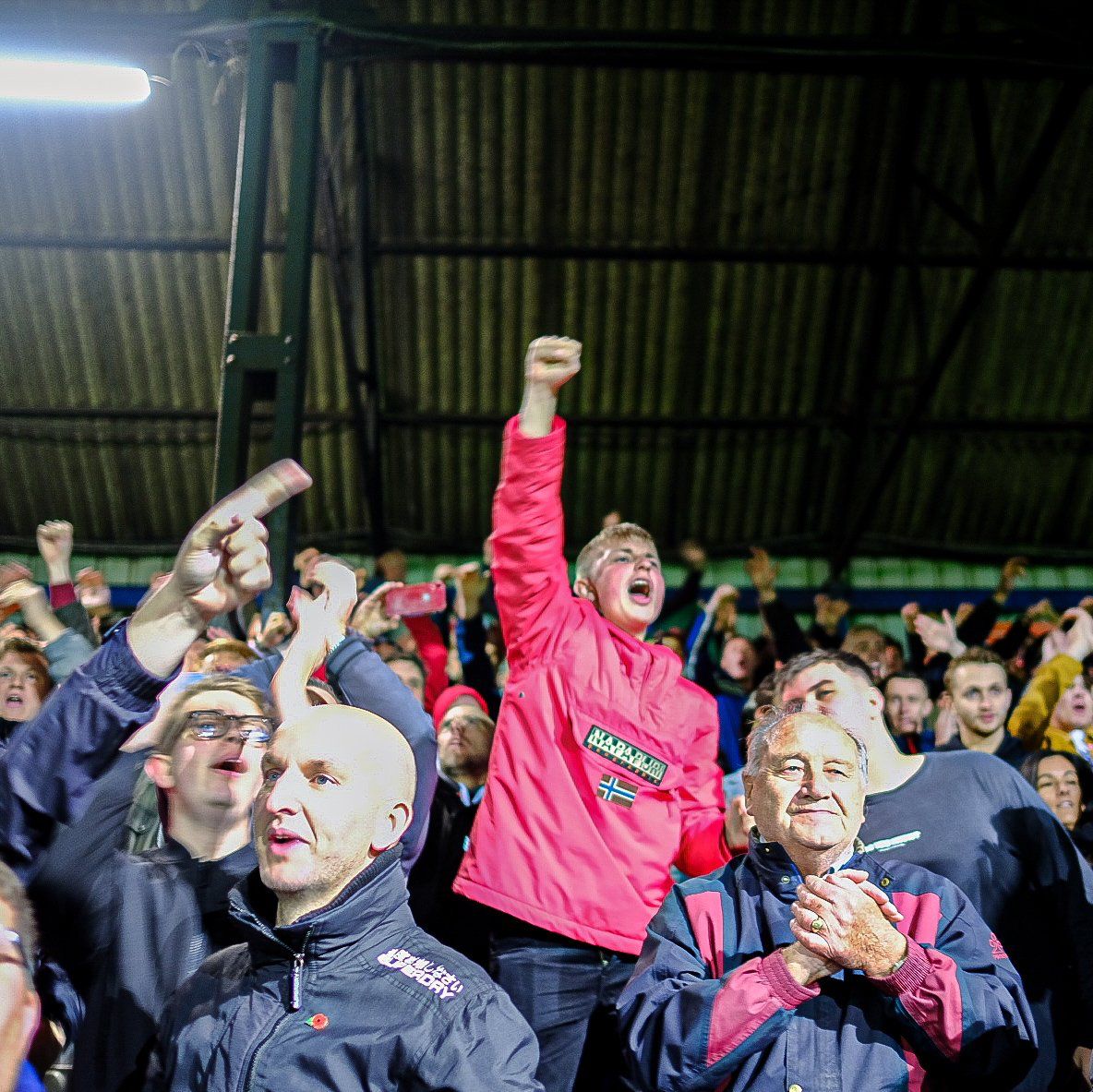 Celebrating the win at Luton in 2019 (Pic: @OurGloriousBanners)

5. I notice you had your game at Fulham next week shifted at very, very late notice. How has that gone down with your fans and how much of a problem do you think rescheduled matches for broadcasters are for match going supporters?

Unfortunately, as a team gets more successful, they will become subject to the TV schedule demands – it goes with the territory.

TV companies have proven year on year that they have no regard for the fans at all.

For attending fans, it can be a massive problem given that even some home fans travel a long distance to watch their team. Not forgetting to mention that sometimes train tickets, hotels etc are planned and booked by fans way in advance. Sky & BT and other broadcasters have only one thing on their mind, and we all know it’s not about the fans who watch their team week in week out.

One of our fans has been cycling to every away game this season to raise some money for some worthwhile causes, imagine how he felt when they changed the Huddersfield fixture from Saturday to a Monday evening!

It’s fair to say that the switch of the Fulham fixture is more than inconvenient for some people, and some will not be able to make the game, but that clearly doesn’t matter to the armchair fans, does it? The only plus side is that it’s a close one relatively easy to get to for us.

6. The game against ourselves has also been moved to an earlier slot for TV audiences, meaning a particularly early start for Forest fans. Where would you recommend for a drink before the game?

For an early kick off its difficult to suggest too many places for pre match drinks. The White House may be available to away supporters and is a short walk from the ground, it’s a Wetherspoons.

You could stop at Leicester Arms pub which is just up from the M1 junction for Luton, but you might need to check its opening! (don’t order food though it takes ages!!) 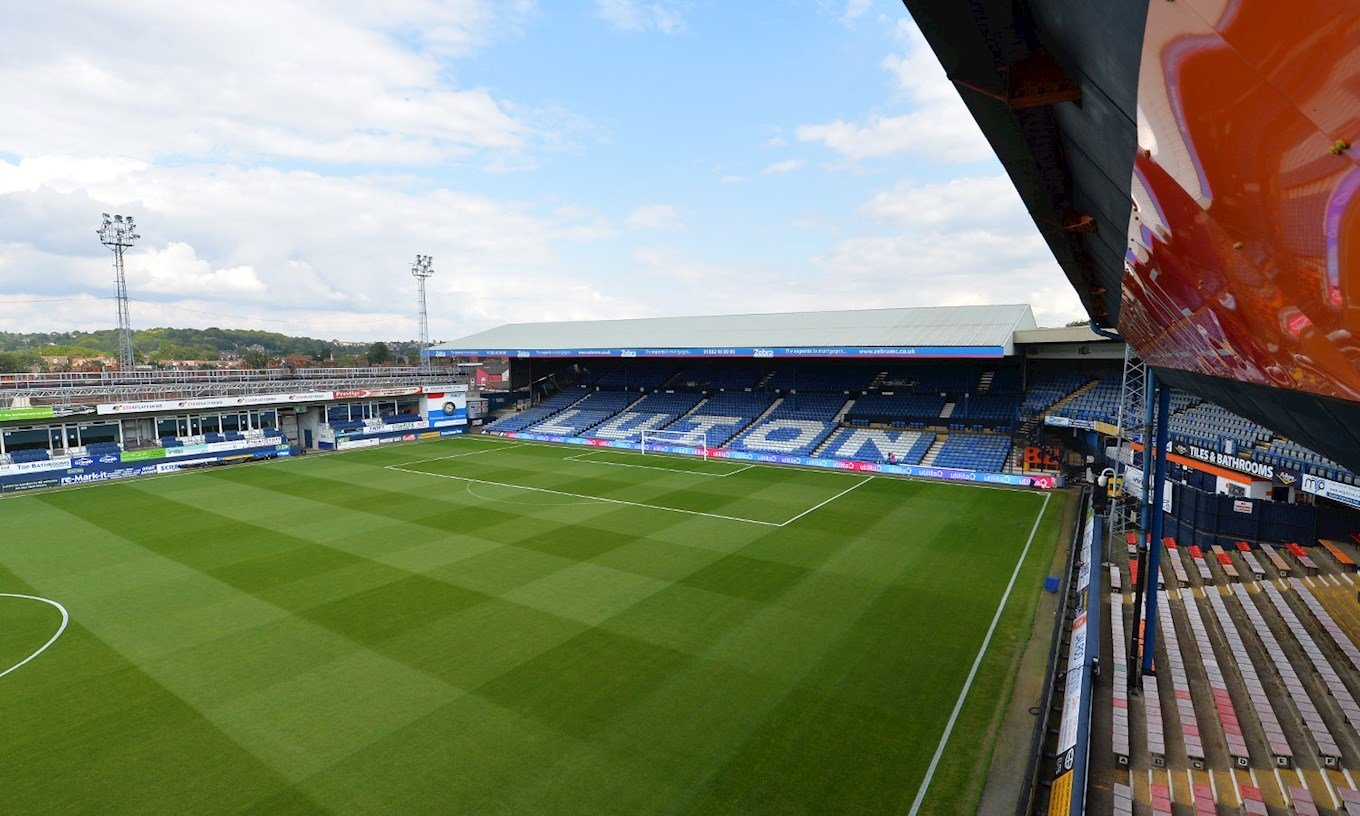 7. Any suggestions of some reliable (and ideally free / cheap) parking?

There free parking on the roads around the stadium, the game is sold out and these will fill up quickly.

In Luton town centre you can park at our new stadium development Power Court. Its reasonably priced and a short walk through the town centre to the stadium.

8. Fulham look like they are up. Which two teams do you think are going to join them?

Anything can happen. I would say that the current favourites are Bournemouth and Nottingham Forest, but every year there seems to be a club that just proves the pundits wrong and hopefully this year it might be us!

Thanks to Dave for his answers. See you all on Friday.