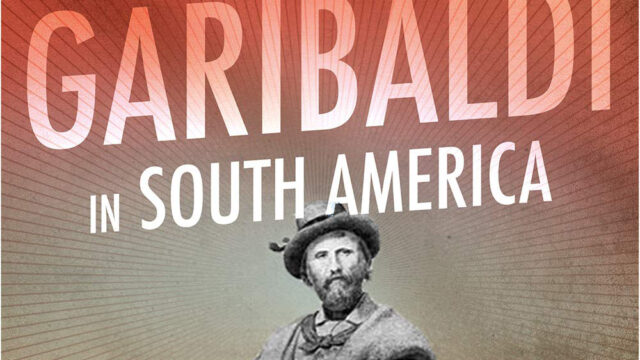 When 15 pioneers met in 1865 at the Clinton Arms to found Nottingham Forest they were inspired by Giuseppe Garibaldi, the revolutionary Italian nationalist. Only the year before he had visited London, invited by Lord Palmerston, the Prime Minister who admired him. In 1860 he achieved worldwide renown with The Thousand Redshirts, liberating Sicily and Naples from the corrupt and feudal Bourbon monarchy. Five years after the meeting at the Clinton Arms, Italy would be united.

By 1865 Garibaldi was a celebrity, especially in England where Peak Frean, an enterprising baker, was selling a currant biscuit named after him. He was good looking, with a melodious voice, and fashionable ladies collected locks of his hair. He had first come to Europe’s attention in 1849 as gallant commander for the Roman Republic which lasted a hundred days after the Pope left the city, before being restored to the Vatican by French troops.

But there was a fascinating backstory, which I describe in “Garibaldi in South America – an Exploration”, available online with Waterstones and Amazon, and at good bookshops. For twelve years Garibaldi had fought, womanised, and learnt the arts of a guerrilla leader on sea and land, in southern Brazil and Uruguay. He met Anita, the love of his life, who eloped as a teenager to join him in southern Brazil, bore him four children – two of whom became Italian generals and a daughter who married one – before dying a tragic death after the defeat of the Roman Republic.

His life in South America is the stuff of a wildly improbable film. He had gone to Rio de Janeiro because he had been sentenced to death after a failed mutiny in the kingdom of Piedmont and Sardinia. Brazil was then, improbably, an Empire though it was ruled by regents. There, as a convinced republican, he joined the cause of a breakaway republic in the south, initially as admiral of its tiny fleet.

Captured early on, he was tortured. He built ships, towing them overland with bullocks to reach the Atlantic. With Anita on board he had hair’s breadth escapes from death. At a land battle in Curitibanos he and Anita were split, she was taken prisoner, and she thought he was killed. When she could not find him among the corpses she escaped, riding through forests and rivers before finding him again.

In 1841 the couple, already with one small baby, went overland to Montevideo with 900 cattle given as a reward, which failed to survive the journey. There they were soon involved in another civil war, fighting for Montevideo against the forces of a former president, Oribe, who was backed by the Argentine despot, Rosas. Here Garibaldi raised an Italian Legion, from among the thousands of expats, mostly from the northern Italian states, threatened by the siege of Montevideo. Significantly he put them in red shirts, the uniform that was to become legendary. The shirts were originally destined for workers in a slaughterhouse in Buenos Aires, available and distinctive.

Garibaldi’s derring-do in the Uruguayan war made him known in Europe, where Britain and France sent naval forces to the aid of Montevideo, and their merchants besieged there. But he became disillusioned with politicking in Uruguay, he thought the situation in Italy was becoming more promising with the arrival of an apparently liberal Pope and a friendlier attitude by Carlo Alberto, the king of Piedmont and Sardinia. So in 1848, after sending Anita on ahead with their three surviving children, Garibaldi came home.

This exciting South American story is what lies behind the Redshirts, who became famous in Europe, and the significance of the colour red for the shirts of Nottingham Forest and many other football teams. It will be an enjoyable, spirited read for those like the dash of romance in Forza Garibaldi.