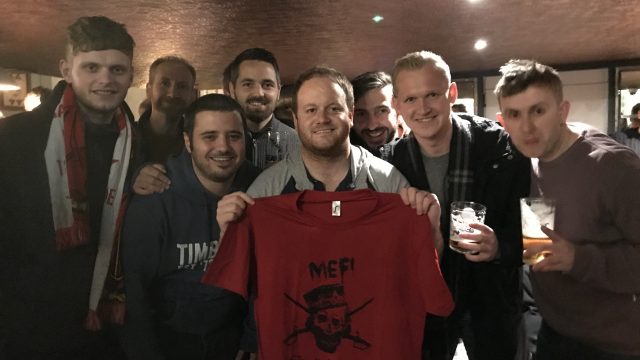 Towards the end of 2019 we received an e-mail from Bruno Martel of the OSG Nice fanzine Quora Ven Lou Dissata who had learned of the connection between Forest and Giuseppe Garibaldi. Unbeknown to us at the time OGC Nice hold probably the most significant of all football clubs with Garibaldi – it was the city of his birth.

We met Bruno in a London pub some weeks after his original e-mail. He was in London with his family and was taking the opportunity to see some football which included our game at Loftus Road against QPR in November.

After returning to Nice, Bruno kindly agreed to tell us more about his club, their heritage and what he makes of English football.

1. We met you recently during your break in London where you attended games at Brentford, Fulham and finally QPR where you saw them take on Forest.

Are there any significant differences attending games in England compared to France?

Well, there are a lot. I think the first one is the seated position for fans. In France, we are not obliged to stay seated, even if there are seats in the stand (some stadium are in test where seats have been removed). That’s one of the reason I wanted to see Brentford.

We also make “tifo”, waving flags, sometimes pyrotechnics and most of the time there is some guys at the bottom of the stand in order to launch songs during the game.

Ticket price are also quite different. In France, we now have tickets for away fans at 10€ in the 1st league. Here, when I was looking for tickets in QPR, I saw that it started at 28£. It’s expensive, but you are still able to been 1800 on Wednesday, quite impressive.

However, your stadiums are full most of the time, which is not the case in France. Love of the English for the football is incomparable.

Finally, alcoholic beers are prohibited in France (maybe there is a link with the previous point). There are some test match to change this, so perhaps, it will be different in few months.

2. The English atmosphere perhaps struggles in comparison to the leagues on the continent. Why do you think this is and what did you make of the atmosphere at the games you attended and those stadiums you have visited on previous visits?

The English atmosphere is the consequence of several years of politic decision against fans. From abroad, it’s quite difficult to tell if they were obliged to act like that, but what happens is that they put out of the stadiums a lot of football fans (banishment, highest price, obligation to sit…) in order to have more consumers. In premier league, I was in City : the atmosphere was very poor. Most of the time, it comes from the away fans but the atmosphere created from home fans is very low. We can see it in European cup when people are coming from abroad. That’s very sad for English fans, but it seems to change, no? Fans in Crystal Palace, Forza Garibaldi, I saw flags, tifo for the Remembrance Day…. Some years before, it wasn’t like that.

During this trip, I was at Griffin Park. I wanted to go to see the stadium and the terrace before they moved. That was nice, but I imagined that the atmosphere would be better. I think I prefer the area with a pub at each corner and the way the stadium has been made.

Craven cottage was very nice. I just regret to have been there on the evening. In afternoon, the park and the Thames, visible from the stand, could be very nice. Atmosphere was better and I really enjoy the stadium with the house at the corner. It was very interesting. Just one thing, stop the “clapper”. I don’t like this kind of objects. People have hands to make applause and some noise.

3. You originally got in touch with us regarding Forest’s connection to Giuseppe Garibaldi. Garibaldi is also an important part of the heritage at Nice. Can you explain why this is and how he is celebrated at your club?

To consider everything, you must know that Nice was the last city to become French in 1860.

Giuseppe Garibaldi was born in Nice in 1807, and during all his life, he still be linked to the city. Often, after all his “trips” or war campaign, he came back here.

In 1860 before the “annexation” of Nice by the France, he was deputy of Nice, and he was opposed to the attachment to France. He tried to fight against but didn’t succeed. This episode, his love for Nice and the revolutionary aspect of his life, I think that’s why people in Nice loves him. We can talk hours about him; there are many books about his life. 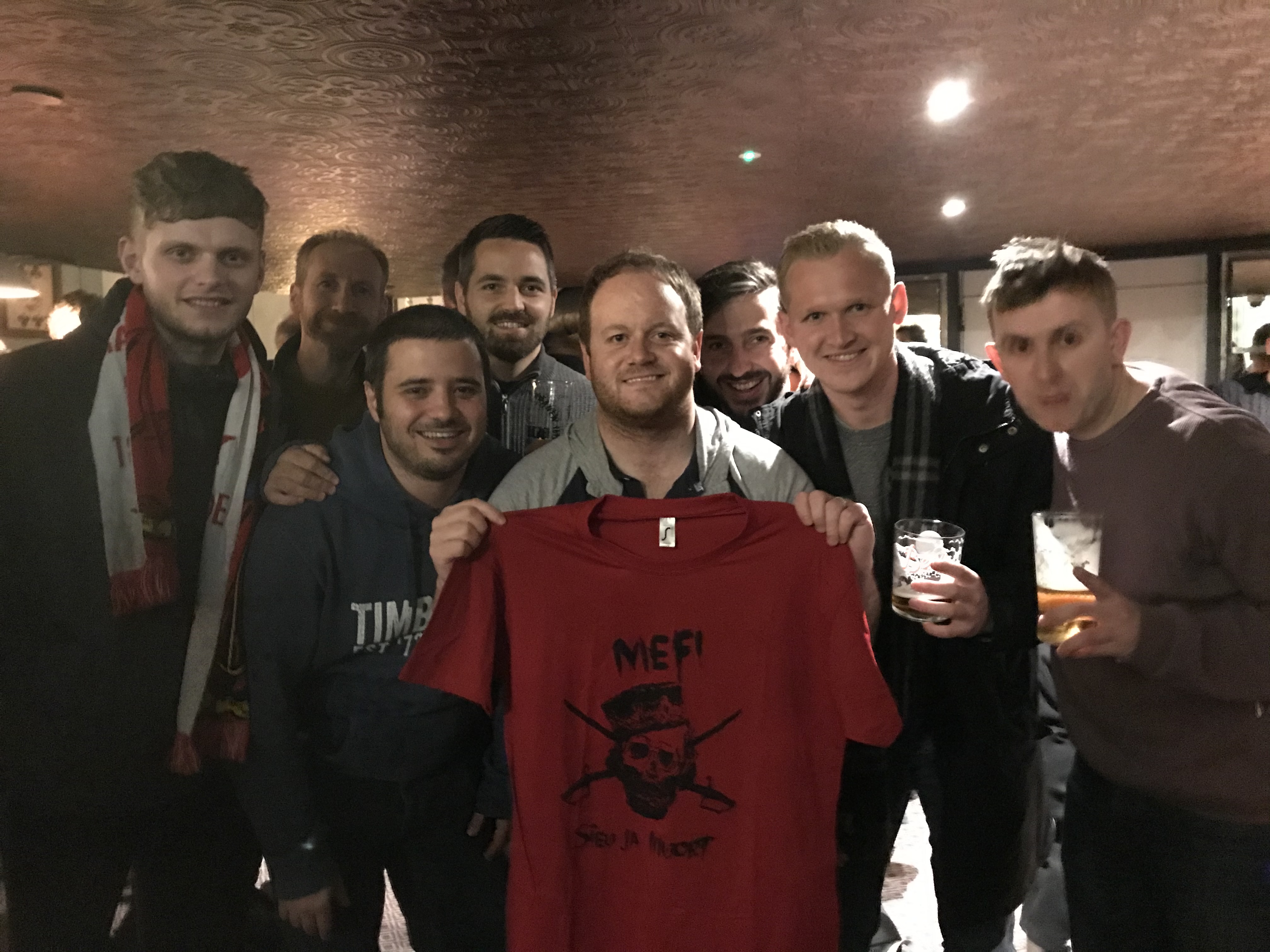 Nowadays, we have a Garibaldi square with his statue and when we moved to our new stadium, fans were allowed to choose the name of the new stands. Two of them have been named according to historical figures of the city: Catarina Segurana and Giuseppe Garibaldi.

4. Do Nice have fan groups and / or ultra groups formed to help the atmosphere at matches?

Yes, we have one of the oldest ultra group in France “Brigade Sud Nice” which has been created in 1985. After some troubles, they were dissolved in 2010 and the new name is “Ultras Populaire Sud”. It’s the main group in the stadium.

We also have general fans group: “Club des supporters” which is in the Garibaldi Stand and do some trips for the away games.

And we have some others young ultra group which have been created during the two last years, in the other stand, but for the moment, there are quite small.

5. You were in the home section when we played QPR for the 4-0 win. What did you think of Forest’s performance?

It was very nice, especially considering that it was on Wednesday (about 1 800 fans, I think ?).  For a game during a week is quite impressive. We are not as much in France for away game. Moreover, there were persons of all ages, as I can see before the game in the pub. In France, it’s youngest fans who go away.

My favorite song was “This is a library”, quite fun, and very realistic! I was disappointed about QPR fans.

6. And how is the season going for Nice so far under Patrick Vieira?

Vieira is here since July 2018. Last year, we started with Balotelli who didn’t want to play for Nice, so we make the whole season without any striker, just with Alan Saint Maximin. We didn’t play very well but we finished 7th, which was not so bad with the players he had.

This summer, even if it took a long time, we have been bought by Sir Ratcliffe and Ineos. They bought quite good players as Ounas, Dolberg and other young players. Results are not so good and the atmosphere is worse. Tactically many fans do not understand his choice and consider that he could do better with the players he has. I’m not sure he will stay a long time in Nice. Perhaps, he will be fired soon. So, I need to finish this interview quickly before he left.

7. Forest are currently led by Sabri Lamouchi who you will be familiar with. What do you know about Lamouchi and his managerial career?

For a football fan in France, two first things we imagine when you ask about Lamouchi, is “Auxerre”, one of his clubs, where he played very well and make the Champions League.

The second thing is the world cup 1998 : Lamouchi was one of the six which has been sacrificed just before the competition, to reduce the list of players from 28 to 22 (with also Letizi, Anelka….) It could have been nothing, but one month later we were world champions, and it could have been very complicated for these players.

As a manager, he was in Rennes last year. The start of the season was complicated but he seems to have been quickly fired. I don’t know exactly the context, but a lot of Rennes fans are still saying that it was a great guy and still involved in there good previous season (win the French cup and quite nice games in Europa Cup). Most of the time, fans are not so kind with a person who have been fired just after one year.

8. Tell us about the fanzine you produce – QVL Dissata. Forza Garibaldi are due to feature in the January edition I believe…

Yes exactly, the interview and presentation of Forza Garibaldi will be in our third edition in January with the story of my West London football trip.

“Quoura Ven Lou Dissata” means “When Saturday comes” in language from Nice (Nissart). We chose that name become our fanzine is more like an English one: we are not directly a fan group and we are targeting every kind of Nice fans (ultra, fans…). So you can find several articles about our last games (home and away), different interviews (fans, author), a groundhopping part where we talk about football abroad (it’s where you will find the Forza Garibaldi interview) and also, a big part, not linked with football, about culture in Nice (article in Nissart, interview and presentation of other associations etc…). It is about 100 pages, every two months.

Most of the time in France, fanzine are made by an ultras fans group and are just talking activities of the group for their members, that’s why I said it’s more like an English one

9. Any plans to visit Nottingham on your next trip to England?

Yes, Nottingham is on my “To Do list”. I would like to do something about cities with two teams/stadiums very close (not the biggest one as London, Manchester…). So Forest/Notts County interest me in the same way as Bristol (with City and Rovers) and Dundee in Scotland (fc and united). I think I will do something about that and try to explain the situation, meeting some fans, but I don’t know when.

After seeing Forest away, I definitely need to see them at home.

Thanks to Bruno for enlightening us. Maybe a trip to Nice is on the cards somewhere down the line…