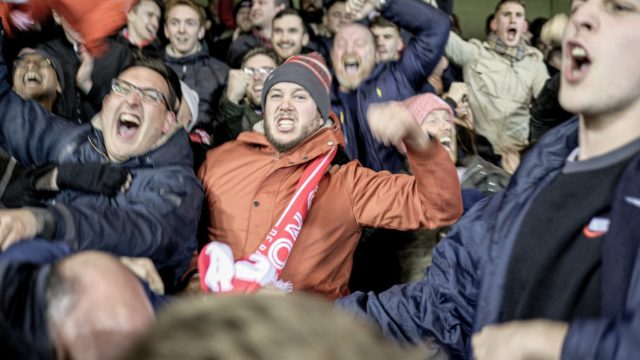 Déjà vu – The feeling that one has lived through the present situation before. The phrase translates literally as “already seen”

You’d be forgiven for having flashbacks to the events of the week before last on your approach to the ground alone last night. Quite possibly joking ‘couldn’t happen again could it?’.

There’s no doubt about it. This was a big night for Forest. The much discussed game in hand we’ve all kept under our sleeve for months. An opportunity to make significant gains on the top two, manufacturered in tandem with the contrasting form of those at the summit and that of our own.

The game, in large, was similar to last weekend too. Very little to separate both teams, with Forest just edging it on points if anything. Struggling to land that killer blow.

With little over 10 minutes to go. Everything changed. The switch was flicked, and touch paper lit. Mr Reliable was there at the back post to edge us in front, and bring a collective wall of noise crashing down on the City Ground.

The energy as Grabban slotted home was ferocious. Bodies quite literally everywhere. Some of which were in rather unnatural positions on the floor, being striden over like casualties in the battle field, but seemingly happy to have played their part and leaving the rest to soldier on.

In the interest of fairness and balance, my now patonted swan dive took a northernly direction this time around. Moving me two rows back up the stand having gone absolutely nowhere near the stairs. The fresh bruises are likely to show their ugly faces in the coming days.

Despite playing a huge amount of games in recent weeks. This was it, the moment we’d waited for. Those pre-ordered 3 points had taken a while to be delivered, but they appeared to have arrived in the nick of time. Perfectly packaged.

The next few minutes was a blend of joyous, jubilant scenes, but the more cautious of peoples eyes telling the full story. Not counting the chickens before they’ve hatched so to speak. Still scarred from 11 days ago in Berkshire. Would express it as something similar to the famous film quote ‘You don’t know man….you weren’t there’.

The fears would become a reality, as the away side did indeed claw themselves back into the game just 3 minutes later. A deathly silence fell over the City Ground, not quite at the level experienced in the away game. But blimey, this stung.

The stress levels over the last few weeks really have stepped up a notch, with arguably more at stake than at any other stage in the last decade. It’s mentally exhausting. Anyone know of a good anti-ageing cream? Asking for a mate.

Last night followed largely the same script as last time. It strangely reminded me of the transition from Home Alone 1, to Home Alone 2. Almost an identical cast, playing out a similar, if not predictable story line and ultimately arriving at the same conclusion. Only difference being the location. This was the sequel.

Whether you belong to the glass half full, or glass half empty camp regarding the recent draws. There can be no argument it’s been a phenomenal month for Forest. We’re in the advantageous position of sitting 4th in the league table, just 4 points from an automatic promotion spot. Who can argue with that?

The next month ahead will really test our metal, and go a long way into proving whether or not we’re in this for the long haul. As even Sabri himself touched on last night, it’s a huge opportunity to go and ‘do something’, and certainly not the time or place to be disheartened.

So just strap yourselves in, and enjoy the ride.