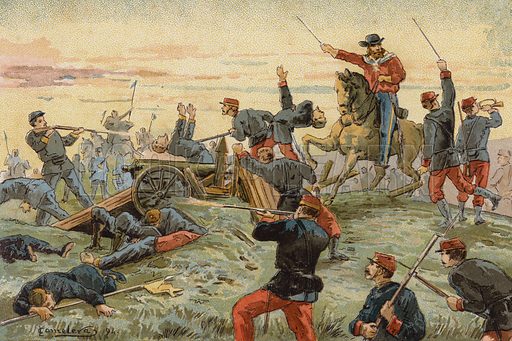 I have recently completed reading a new publication on Giuseppe Garibaldi, entitled Garibaldi in South America – An Exploration. While it was a book I certainly had a desire to read there was part of me that felt it was necessary to. At Forest, and certainly those of us that count ourselves as part of Forza Garibaldi, there is a general appreciation of the Italian and an acknowledgement of his heroics in unity his home country. Yet, for a man who had an unintentional but significant impact on our club, there is much that I don’t really know about him in truth.

In his new book, referred to from here on in as Exploration, Richard Bourne provides a very accessible platform should you wish to educate yourself further on Garibaldi’s life and achievements. The Author has provided a brief but interesting summary of the book which you can find by following the link below. Fundamental to the book is that Garibaldi was a ‘Hero of two worlds’, the well-known Italian campaign but also though the twelve years spent in South America previously. There is a reference towards the end of the book to Garibaldi’s involvement in conflicts in Brazil and Uruguay and how some suggest they served as an apprenticeship to his ambition to unite Italy. Exploration does not dismiss these wars as a precursor, it raises them as a core part of Garibaldi’s life and his time there was linked intrinsically to what would follow in his homeland. A key reason for this is the meeting with his future wife Anita who would eventually return to Italy before Garibaldi on what was effectively a scouting mission.

Garibaldi in 1846 fighting in the Uruguayan Civil War

It would be understandable if Forest supporters didn’t hold a vast amount of interest in this story. Garibaldi had no link to Nottingham or the fifteen who formed the club in 1865. Like many across the world Garibaldi’s experiences made him a celebrated figure and our Garibaldi uniform owes itself only to this and perhaps some loosely shared ideals that inspired the very first Foresters. Yet this is a fascinating story and Exploration helps dig further into the details behind the famous Red Shirts that would one day dazzle the football fields of England. The Garibaldi Red had its initial beginnings as a wristband which belonged to the Colorado’s (Coloured Red in Spanish), one faction in a Uruguayan civil dispute centred on Montevideo. Satisfyingly, on the opposite side to Garibaldi was the Blancos (whites).

While the book does not specifically note this as the birth of Garibaldi’s link to red battle dress it seems distinctly possible that this was the very beginning of the story of Nottingham Forest’s Garibaldi Red. And from Exploration we hear about how the red wristbands, quite by chance, evolved into the famous red blouses through a set of uniforms that were originally bound for a slaughterhouse in Buenos Aires. The key involvement of Montevideo and Buenos Aires in this tale is a detail of beautiful serendipity considering the 1905 Nottingham Forest tour to these two cities which helped develop the South American game and led to Independiente of Buenos Aires adopting the Garibaldi Red in tribute to Nottingham’s Original Reds. That red destined for the slaughterhouse finally found its way to the city decades later via Italy and then Nottingham.

This particular strand was a wonderful find for me in Exploration; I wrote a piece on the legacy of Forest’s Original Reds earlier this year and this is a terrific addendum to that narrative.  Still, there is much more to this than a few minor hints to Nottingham Forest; and Bourne’s weaving together of Garibaldi’s South American voyage certainly shouldn’t be cheapened with football references because it is an extraordinary piece. The depth of research is wonderful and the final chapters of the book refer heavily to the Author’s time spent in Garibaldi’s footsteps in Brazil and Uruguay examining how his legacy stands up today. While Exploration purposely steers away from an interrogation of the Italy campaign it too features as part of how it was influenced by the South American years. And this provides a suitable introduction to anyone like me who possesses only a basic knowledge of how Garibaldi helped reform Italy.

Refreshingly, Exploration does not put Garibaldi on a pedestal. It shows his flaws in addition to his many admirable and heroic traits. Furthermore it examines how he was labelled a simple mercenary by some in South America and the impact it has had on how he was viewed in later years and in the present day.

There is a fair amount of politics to contend with as this naturally was the backdrop for the conflicts that Garibaldi became part of but that should not dissuade you from this book. It documents war at sea and on land, romance and treachery and an inevitable abundance of loss and sorrow. At its heart is the tale of a man who fled Italy under the black cloud of a death sentence and lent his services to causes across the Atlantic that he believed in. This is perhaps best captured by borrowing a quote directly from Exploration. In 1845 he and members of his Italian Legion were offered land in Uruguay in gratitude for their service. The French Legion accepted but Garibaldi declined. In doing so he stated that he and his men had fought only for ‘…the honour of sharing the perils of the children of this country which had afforded them hospitality.’

Exploration should certainly not be read with Nottingham Forest in mind. But for those of us who place significance on the heritage of the club then Giuseppe Garibaldi is a valued part of our earliest history. And if we idolise him in banners and slogans and we are proud to wear his colours then probably we should take a moment to learn his story. There is likely no better place to start than with Garibaldi in South America – An Exploration.

The book is available via this link but can also be sourced from other locations: https://www.amazon.co.uk/Garibaldi-South-America-Richard-Bourne/dp/178738313X

Words from the author…